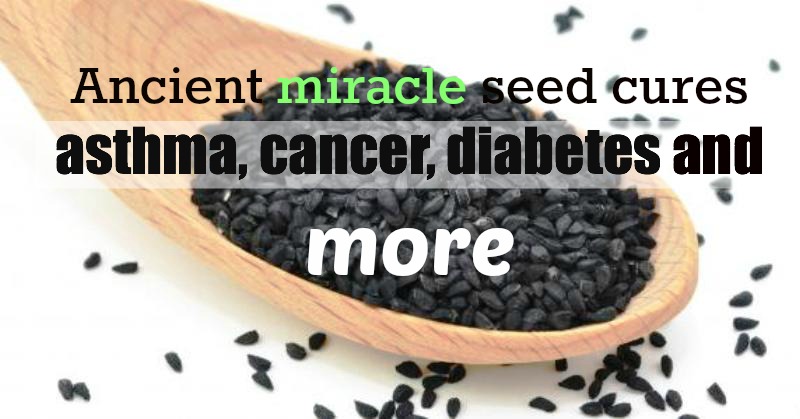 Who knew that such a small seed could tackle diabetes, cancer, asthma and much more. Black cumin (Nigella sativa) is known as the “seed of blessing”.  Black Seed oil, derived from Black Cumin,  was used widely by ancient cultures. Black Cumin seeds were found in the tomb of Egyptian Pharaoh Tutankhamun, who ruled Egypt from 1333 BC to 1324 BC.  Queen Nefertiti used Black Seed oil (here) in her beauty regime to promote healthy hair and beautiful skin. Black Cumin also was referred to as ‘Melanthion’ by Hippocrates and Dioscorides.  It is also mentioned in the Bible as the ‘curative black cumin’.  Ancient Greek records indicate that the famous physician Dioskorides used Black Cumin to treat and cure a variety of illnesses including intestinal parasites, respiratory congestion, toothaches, headaches, and amenorrhea.

1. Black Cumin and Asthma.  Due to  Thymoquinone, one of the main active substances of  black cumin, it is effective in elevating asthma.  In one of the studies, it was found that boiled water extracts of black seed have a relatively potent antiasthmatic effect on asthmatic airways. German research has found that 70% of patients with allergic conditions such as pollen and dust allergies benefit from treatment with Black Cumin seed oil.

2. Black Cumin and Auto-Immune Diseases.  Nigellone and Thymoquinone in Black Cumin helps fight diseases by increasing the production of immune cells in the body.

3. Black Cumin and Diabetes. Due to the massive amounts of antioxidants, black cumin is able to reduce damage to the pancreas and digestive system which may provide aid with diabetic symptoms.

4. Black Cumin and Immune System. Due to the abundance of vitamin C, vitamin A and essential oils, cumin increases your ability to fight infections.  Black Cumin  stimulates immune cells, protecting them from damaging viruses.

5.  Black Cumin and Cancer.  Due to the thymoquinone, beta-elemene and beta-sitosterol in this black seed, it exhibits powerful  anti-cancer properties. It induces cancer cell death and enhances immunity.  Many studies found it to be effective against pancreatic, colon and breast cancer.

Just take a teaspoon of Black Cumin seed oil mixed with honey for breakfast, lunch and dinner. It can do wonders for your health and immunity.   This little black seed truly is an outstanding natural panacea.
This content will be shown after all post