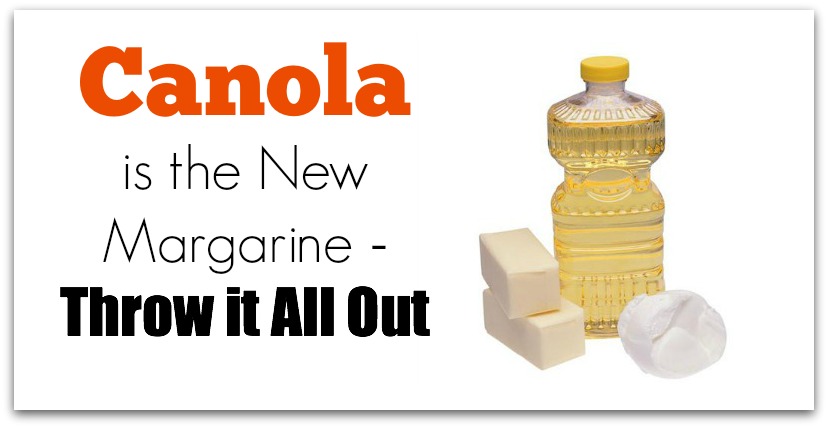 Remember when margarine was the substitute for butter? Hey, I can’t believe it’s not butter! Wow. Margarine is a molecule away from being plastic, and we wonder why so many old folks in America have Alzheimer’s and Parkinson’s disease. The plastic fat is clogging their brain veins. No oxygen to the brain means expensive 24/7 nursing care, lots of pharmaceutical medications and hundreds of thousands of dollars for sick care. Do you see where this is leading?

America loves their canola! Who would really eat it if they knew that it was made with hexane vapor — a gasoline constituent? Even organic canola that’s “expeller-pressed” comes from something we’re not even supposed to eat in the first place — rapeseed. Canola is not a plant, or at least not until some mad scientists got a hold of rapeseed and altered it. Yes, I know, this is harsh for most people to address. Their canola oil food bar will be dead to them. Forget all those salads — the potato salad, the chicken salad, the tuna salad and the egg salad. Forget the macaroni salad and the pasta salad, all creamy with chunks of other (GMO) food stuff.
(http://www.naturalnews.com)

Canola is like sodium benzoate, as it chokes your cells, ruins your immunity and requires extra “processing” by your body just to filter out the toxic synthetic oil that comes from rapeseed. You know, when manufacturing and processing companies and corporations make canola, they ALL have to put it through a DEODORIZING PROCESS to remove the stink. Look it up!
(http://www.naturalnews.com)

Polyunsaturated fat is a prime source of DNA-disrupting free radicals, thyroid-killing omega-6 fatty acids and metabolism-squashing inflammation. What’s worse for your health than processed white flour, refined sugar and high-fructose corn syrup? Try a distorted ratio of fats, like 16 to 1, where the omega-6s and -9s outweigh the -3s. (http://butterbeliever.com) I really don’t care if organic canola oil is your new margarine, but what I do care about is false advertising, misleading health information and myths that are perpetuated by companies who don’t want to give up their “easy money.”

High in unsaturated fats, canola oil delivers more than a nifty name that was derived from Canadian rapeseed oil. Do expeller presses remove the stink of rapeseed? Erucic acid, the fatty acid in canola, causes heart damage in rats. Are you a rat? Your DNA is 99% the same. Consider this: “Since the year 1995, biotech giant Monsanto has manufactured rapeseeds that are genetically engineered to be resistant to the herbicide RoundUp.

“Today, about 90% of the world’s Canola crop is genetically modified.”

So, do you trust the GMO giants of the world to continue serving you “organic” canola? Get smart on oils and do it now. Dr. John Bergman speaks about thyroid adrenal health, oxidation, inflammation and disease reversal. Stop eating canola and all the other processed oils. Learn how to keep a healthy thyroid and adrenals. Check out coconut oil, especially if you cook food with oil, only use real, organic olive oil and keep it raw! (https://www.youtube.com)