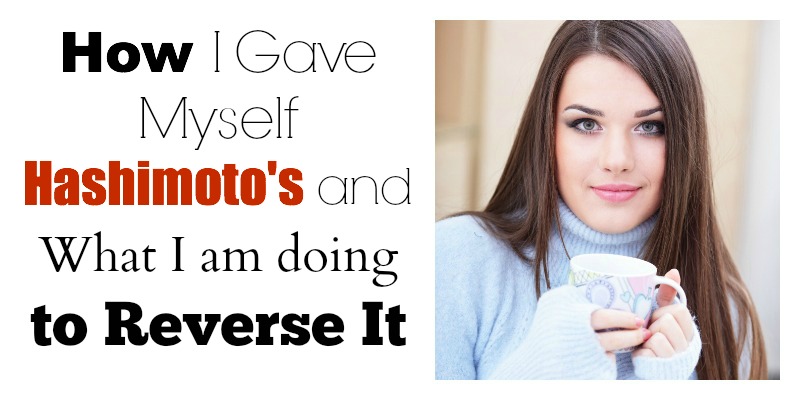 Before you jump to conclusions, this was not a conscious thing. I gave myself Hashimoto’s only because I didn’t know any better. You know how the Bible says, “the truth will set you free”, well I didn’t have that truth before and now I do and some might think it’s too late but is it? Now I realize how I gave myself this thyroid disease and I know how to treat it. But let’s start from the beginning.

I’ve had hypothyroidism for 9 years now.  I can tell you exactly what caused it and when. It happened when I first moved to America 11 years ago.  I was “fresh off the boat” and naive to the true facts about the American food industry. You see, I had an idealistic view of America; I really thought all the best came from USA including food. So the first couple of years, I was oblivious to organic foods and GMO issues. I shopped at the same stores that most Americans shop at.  I viewed soy milk as healthy and low fat as the right way to go. On top of everything, my friend introduced me to Herbalife. In my quest to lose a couple ponds, I drank their shakes every day as a meal replacement.  After 2 years, I started having severe headaches almost every day. A visit to the doctor came with shocking news – I have Hashimotos.  What is Hashimoto’s, you might ask?  Hashimoto’s is an autoimmune disease effecting the thyroid (meaning the body attacks the tissue of its own thyroid).  It leads to inflammation and tissue damage resulting in reduced levels of the hormones which are normally generated by the thyroid itself. This sounded like a life sentence to me because that’s pretty much how the doctor described it. I got prescribed thyroid medication which I’ve been taking daily since then. The funny part was, my doctor has never told me why I got it and whether there are alternative treatments for the disease.  Well, she actually told me it was hereditary; I did buy it then but I am not buying it now. No one in my family has ever had any thyroid problems.

Almost 2 years ago, I started getting more into a healthy lifestyle and digging deeper into the research about Hashimoto’s.  What I discovered, blew my mind.  All the dots were connected.  My research and my problems with thyroid lined up.

How I Gave Myself Hashimoto’s

The truth is, I was eating too much soy.  I not only used soy milk to make my shakes but most of Herbalife products are soy based, and chances are, the soy they use is GMO.  Here is an amazing referenced book about the dangers of soy – The Whole Soy Story: The Dark Side of America’s Favorite Health Food    Did you know that soy contains isoflavonesm which mimics your hormones and leads to the disruption of hormone systems in your body? This is exactly what happened to me. Of course having genetically modified soy will only make things worse.

Did you know that Gluten Triggers Autoimmune Disease? Gluten slowly destroys our small intestine.  As we know, the small intestine is responsible for converting food into fuel and then releasing it into cells for nourishment. When the proper functioning of the small intestine gets disturbed, our cells don’t receive proper nourishment. This leads to many diseases such as irritable bowel syndrome, thyroid problems and autoimmune diseases like Arthritis and Hashimoto’s. (source)

Let’s admit, most food in America is genetically modified.  With wheat, corn and soy being 90% GMO, it is hard to avoid it. Why are GMO’s  dangerous for your thyroid?  Well, Genetic modification creates new proteins the human body has never before seen. They become these foreign organisms which our bodies try to attack and destroy. It causes our bodies to be under constant stress which in turn creates inflammation and leads to autoimmune diseases such as Hashimoto’s.

I highly recommend reading this book – Why Do I Still Have Thyroid Symptoms? when My Lab Tests Are Normal: a Revolutionary Breakthrough in Understanding Hashimoto’s Disease and Hypothyroidism. It saved my life and gave me so much understanding of what I am going through.

What I am Doing to Reverse Hashimoto’s

You need to understand that first and foremost, Hashimoto’s is an auto-immune disorder which attacks the thyroid like foreign tissue.

I’ve been off gluten for 2 years now and I’ve been following the paleo diet (you can read about it here).  Dr. Datis Kharrazian, in his book “Why Do I Still Have Thyroid Symptoms?, explains, “Removing gluten is a vital first step if you have Hashimoto’s. Even if you don’t have Hashimoto’s, chances are removing this ubiquitous toxin from your diet will help you greatly. Numerous studies from several countries show a strong link between gluten intolerance and Hashimoto’s. When immune antibodies tag gluten for removal from the bloodstream, where it landed thanks to a leaky gut, it stimulates production of antibodies against the thyroid gland as well. In other words, every time you eat gluten, your immune system launches an attack not only against gluten but also against the thyroid gland. This immune response to gluten can last up to six months each time it’s ingested. It’s just not worth it. Also, as I continue my research and practice in neurology, I never cease to be amazed at how profoundly one’s brain health, a concern for all those struggling with hypothyroidism, can be impacted by removing gluten from the diet.” (Read why  Gluten Impact Goes Beyond Celiac Disease)

A GMO-free diet should be part of your protocol to manage your autoimmune Hashimoto’s hypothyroidism. I eat as much organic as I can. I don’t eat soy, corn or wheat. I almost never eat out; it’s all about home cooking for me.

As I mentioned earlier, eating soy is the worst thing for people with Hashimoto’s. Soy is a phytoestrogen, meaning it acts in the body much like a hormone, so it’s no surprise that it interferes in the delicate balance of the thyroid’s hormonal systems.

I have to say, since starting my journey of self healing, I definitely have seen massive results. First of all, I don’t get headaches (which I used to get all the time).  My thyroid medication dose went down (for most people it only goes up with time).  I lost 20 pounds and feel amazing!

*These statements have not been evaluated by the Food and Drug Administration.
This product is not intended to diagnose, treat, cure, or prevent disease.