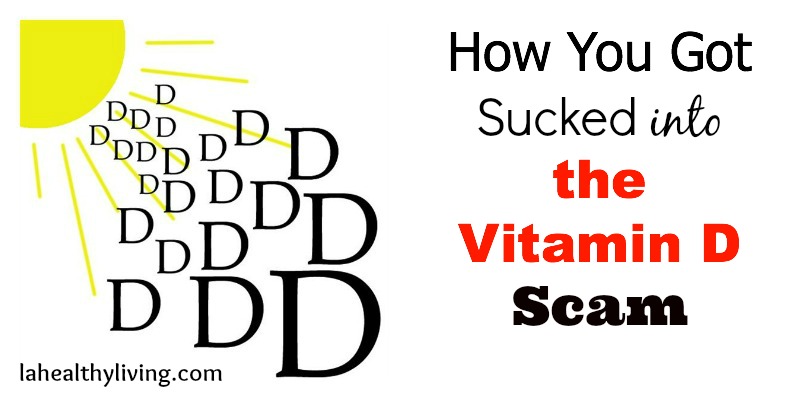 Let me start by saying that Vitamin D is absolutely necessary for the proper functioning of your body.  It’s the essential vitamin that our bodies can not produce on their own.  Unfortunately, Vitamin D deficiency is now recognized as a pandemic. The best and most efficient way to get it is through sun exposure but if you don’t live in warm sunny places, then supplementation is a must. Then what’s the scam you might ask? After all, doctors recommend Vitamin D supplements and even the dairy industry got the memo so they produce milk fortified with Vitamin D. However, in spite of this seemingly good advice, the reality is quite different.

A couple of years ago, when I was pregnant with my son, my doctor heavily recommended I take vitamin D supplements. Well, at that time, I was a somewhat obedient patient so I went ahead and I bought a bottle from Whole foods. But mind you I live in Southern California, there isn’t any shortage of sunshine. The sad part about this, my doctor never even mentioned the idea of simply going out and getting a free dose of Vitamin D. So you see where I am going with this? Let’s look at a few reasons I believe Vitamin D has become a profitable scam.

Vitamin D Deficiency: How You Got Sucked into the Vitamin D Scam

1. The Sun is not an evil monster.

I am personally really tired of hearing how sun exposure causes cancer.  Aren’t you?  What about the centuries of extreme exposure to Sun (farming and hunting…) and so few cases of cancer?  The truth is, no sunlight means no Vitamin D.  It’s as simple as that.  We’ve been lied to about the dangers of sun exposure because the sunscreen industry is a billion dollar industry. Conventional sunscreen not only contains very dangerous ingredients but multiple studies have found that wearing sunscreen significantly limits the body’s ability to produce vitamin D from sun exposure.

2. Most Doctors recommend the wrong type of Vitamin D.

If I weren’t a tedious health researcher, I would have not payed attention to the type of Vitamin D I recommend in some cases. I would probably not know the difference. But the truth is, most doctors prescribe Vitamin D2 instead of Vitamin D. Vitamin D2 is a synthetic version of Vitamin D. Why would they prescribe it?  This is because pharmaceutical companies cannot patent natural compounds. Thus, they went around the problem by creating a synthetic version. Vitamin D2 is not only ineffective but may be doing more harm than good. It can not be manufactured by the human body even when the skin is exposed to sunlight. In a paper published by the American Journal of Clinical Nutrition, researchers Lisa A. Houghton and Reinhold Vieth caution that D2 should not be considered an equivalent supplement to D3.

Most people I know tend to buy milk with Vitamin D. In their minds, it has become a must when it comes to buying milk. We’ve all been deceived. Why? Because as I mentioned earlier, dairy companies add chemically-synthesized vitamin D.  A study published in the American Journal of Clinical Nutrition found that synthetic vitamin D2 “should no longer be regarded as a nutrient appropriate for supplementation or fortification of foods,” because of it’s ineffectiveness and even danger to our bodies. When ingested, Vitamin D2 is broken down by the body into different substances some of which can be very harmful.

If you choose to supplement with Vitamin D, you need to choose D3 (here).  Look for animal based supplements.  You can also obtain small amounts of vitamin D from your diet through animal based sources such as:
This content will be shown after all post