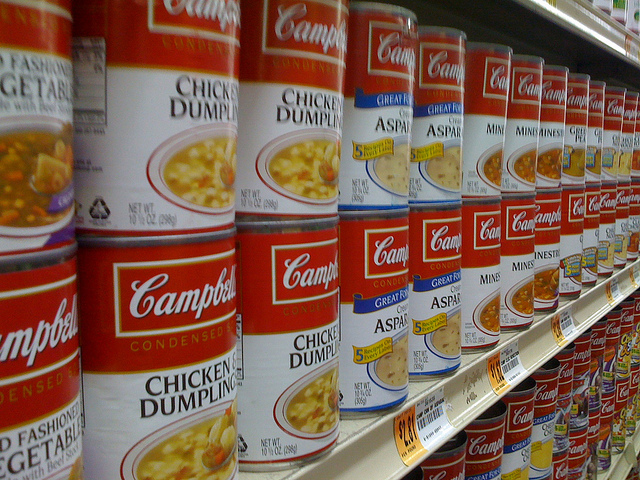 Do you really know what’s in your canned soup? How about toxic, dangerous, and hormone disrupting ingredients ? Canned soups are loaded with MSG, processed salt, additives, and genetically engineered ingredients. Many companies also still use cans with bisphenol-A (BPA) in the lining.

A recent study published in the Journal of the American Medical Association, found that those who ate canned soup every day for lunch for a week had BPA in their urine and those who ate homemade soup didn’t.

Monosodium glutamate (MSG) Animal studies have found that MSG is toxic to the brain, and researchers believe it causes migraines in people because it dilates blood vessels and impacts nerve cells in the brain.

“In the latest research … [scientists] followed more than 10,000 adults in China for about 5.5 years on average. The researchers measured MSG intake directly by before-and-after weighing of products, such as bottles of soy sauce, to see how much people ate … Men and women who ate the most MSG (a median of 5 grams a day) were about 30 percent more likely to become overweight by the end of the study”.

MSG has been found to contribute to many neurological conditions, such as Alzheimer’s disease, Parkinson’s disease, Lou Gehrig’s disease, stroke, encephalitis, and brain infections.

Vegetables Oils are really high in PUFA (polyunsaturated fats). The entire composition of our bodies is around 97% saturated and monounsaturated fat. In order to renew and rebuild our cells, our bodies require fat. And if we constantly give it unhealthy and unnatural fats, it will use them with the sad end results.  Vegetable Oils are dangerous for your health as they get oxidized right away when they are subjected to heat. This leads to creation of free radicals which, as we know, contribute to premature aging and many diseases.

Aluminum is very dangerous to the human body  – even in small amounts.Those aluminum cans leech aluminum into your soup. Over a period of time Aluminum accumulation in body can cause dementia, autism, and Parkinson’s disease. Once ingested, aluminum accumulates in various tissues in the body, including the kidneys, brain, lungs, liver and thyroid. Aluminum damages your central nervous system.  Recent studies also point to a strong link between aluminum and breast cancer.  A study published in the Journal of Inorganic Biochemistry in July 2013 found that breast cancer patients had significantly higher levels of aluminum in their nipple aspirate fluids when compared to a control group of healthy women without breast cancer.

BPA is an industrial chemical that has been used to make certain plastics and resins since the 1960s. BPA (Bisphenol A) mimics estrogen in our bodies, binding to the same receptors as natural female hormones which might be damaging. B\BPA is an endocrine disruptor, which means it mimics or interferes with your body’s hormones and “disrupts” your endocrine system. BPA has been linked in animal studies to cancer, obesity, infertility and diabetes.

The U.S. Center for Disease Control (CDC) found traces of BPA in 93% of urine samples they took for a 2004 study. So all of us have that potentially damaging chemical in our bodies.