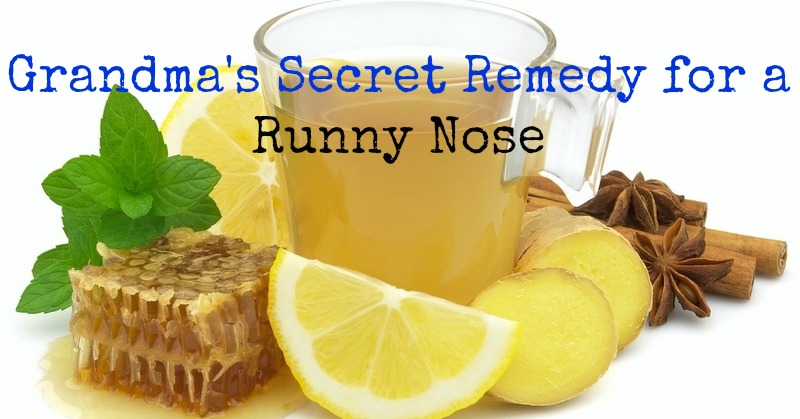 When I was young I thought my grandmother knew it all.  She had remedies hidden in her head for nearly anything… and they all worked. I don’t ever remember taking over the counter medications, it all came out of her kitchen. Then came the period of my life when I thought I knew it all. I viewed my grandmother’s natural remedies as outdated and too complicated. For a while I thought it would be so much easier to go to the pharmacy and grab whatever you want. Now, being a mother myself, I realize that my grandma was right.  Trying to stay away from conventional medication, made me go back to all the natural remedies of my precious grandmother.

A runny nose is not a painful ordeal, but it is certainly annoying.  Especially if it lasts for several days. The end result – a red scabby embarrassing looking nose that might keep you inside for a while. To avoid the discomfort and embarrassment, here is a natural and effective remedy for a runny nose. It is so effective that it is almost miraculous.  The best part – there are no side effects.

Prepare a cup of camomile tea and add all the above ingredients. Chamomile has the ability to strengthen the immune system due to its antibacterial properties. Ginger increases blood circulation by warming up the body and thus, clearing up mucus. Garlic has a beneficial effect on the respiratory system. Inhaling the vapors of garlic can clean your lungs and bronchi. Garlic also acts as an expectorant, which helps move mucus and makes coughs more productive. Finally, cinnamon possesses  properties that can help treat cold symptoms such as nasal congestion and inflamed tissues.

This tea mixture works for me every time I take it. Your runny nose should go away the next day.