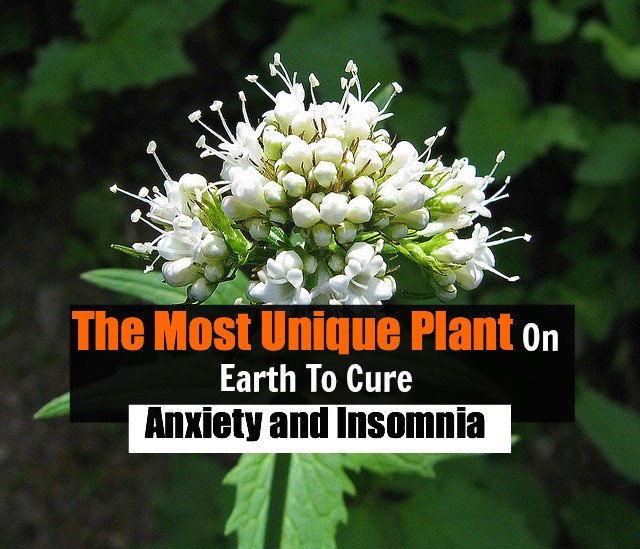 Have you heard of or used Valerian root? It’s very popular in Europe and is used to calm nerves and to manage certain cardiovascular problems.  I remember growing up in Europe, it was all my grandparents and parents used (here).   In Latin, valerian root means “to be healthy!”

Not bad, right?  Oh, and this plant is famous for its ability to drastically calm shattered nerves down, normalize sleep and just improve ones entire overall mood.

Valerian root was also used in ancient Greece and Rome. It was used as a remedy for several various health problems such as anxiety and insomnia.

How to Use Valerian To Cure Anxiety And Insomnia

The unique composition of Valerian Root has no analogues among other medicinal plants. The roots of this plant contain about a hundred individual substances, which include, acids, alcohols, alkaloids, tannins, organic acids, saponins, glycosides, vitamins A, B and C. Due to the unbelievable content of useful substances  (the area of influence on the human body is enormous) scientists have found that this plant has the ability to suppress the Central Nervous System and reduce muscle spasms.  Valerian Root reduces anxiety and increases the functional mobility processes in the brain cortex. The healing properties of Valerian Root regulate the cardiovascular system, improve the circulatory processes, reinforce the processes of bile secretion and increases the secretion of the gastrointestinal tract. But, the main (well-known) property of this plant is, of course, antispasmodic and sedative.

Top Effective Ways To Use Valerian

Though scientists are not sure how Valerian works when it comes to getting rid of migraines.  They believe that the substances contains in Valerian possess sedative and relaxing properties that can relieve headaches and migraines.

Valerian Root has sedative properties that help with sleepless nights. It’s a great natural alternative to sleeping pills as it doesn’t cause drowsiness throughout a day.  There is no standard dose of valerian. For insomnia, many studies have used between 400 milligrams and 900 milligrams of valerian up to two hours before bed. Valerian can be taken as a tea or herbal tincture or in capsules or tablets. You can take 150 mg two or three times daily to help reduce anxiety symptoms.

Valerian Root has been shown to get rid of pain and discomfort caused by diarrhea, gas, and cramps. Valerian is also able to cure indigestion as it helps to relax the lining of the stomach.  You can buy Valerian Root in various forms. It’s sold as a powder, liquid extract (here), as a supplement and as a dried extract to make tea (I use this one). Dosage varies depending on the health problem.  Fun Fact Cats are crazy about Valerian as it contains a chemical called valerinone which is similar to catnip.  Sources: http://ods.od.nih.gov/factsheets/Valerian-HealthProfessional/