Most of us live our daily lives with at least some degree of fear of germs and bacteria. For years we’ve been brainwashed with all the supposed dangers of being exposed to germs. So, we buy multiple antibacterial products to protect ourselves. We live in the state of paranoia. But the truth is, we are robbing ourselves of good bacteria and exposure to germs that actually do good for our body. Getting a fever, for many, demands an immediate response to action. We then rush to the drug store for a fever suppressor instead of really rejoicing over it… because it’s a healthy sign!

Our bodies are wonderfully made. Our body knows when to act and how to act. It turns on its defense mechanisms when faced with bacterias or viruses.  One of the most fascinating and important defensive tools we have is a FEVER.  Why?  When our temperature goes up, it stops the bacterial invasion which then eventually dies off.
Kids, Herbs & Health: A Practical Guide to Natural Remedies

What is a fever?

A fever is an internal temperature that exceeds 100.4 degrees, whereas a normal body temperature is 98.6 degrees Fahrenheit.  Most bacteria is not able to survive the temperatures associated with a fever.  Commonly, fevers are short and not dangerous if they remain under 104 degrees.  In fact, in most traditional cultures, fevers were accepted as a natural remedy because the fever was often followed by recovery. According to the famous pedeatricion, Dr. Robert Mendelsohn,  “There is a common misconception that the height of body temperature is an indication of the severity of an illness…Research has shown that more than half of all parents consider a fever high at levels between 100-102. And almost all believe it is high if it reaches 103 degrees. These parents are also convinced that the height of a fever indicates how sick their child is. This emphatically is not the case. Knowing the level of your child’s fever will tell you nothing of how sick he is or if the fever is produced by a viral or bacterial infection. There’s nothing to be gained by measuring its climb and by doing so will only magnify your fears and upset the child. Even a temperate of 105 need not be a cause of concern.” – (How to Raise a Healthy Child In Spite of Your Doctor)

A Fever is healthy for your immune system

Your immune system gets stronger when its challenged. The same goes for everything, the more we practice, the better we get. A Fever helps our bodies to adapt. It not only fights infections, but also gives us a stronger immune system.  Our bodies know what the optimal fever temperature is as it doesn’t want to kill both good and bad bacteria. The increase in tempreture also stimulates our enzymatic activity. In other words, it forms an unpleasant environment for viruses and bacteria. 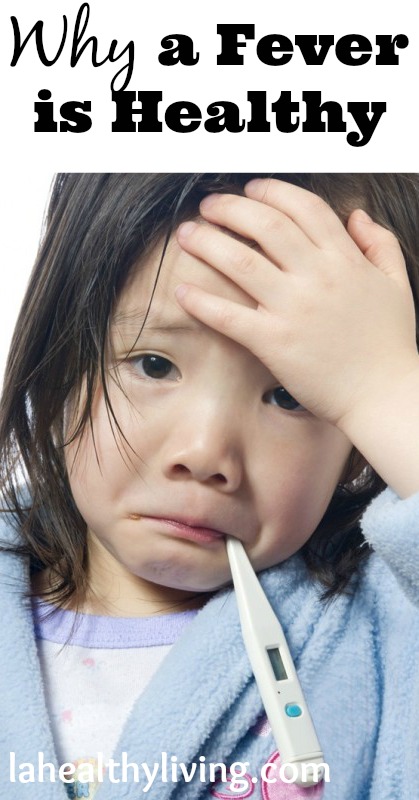