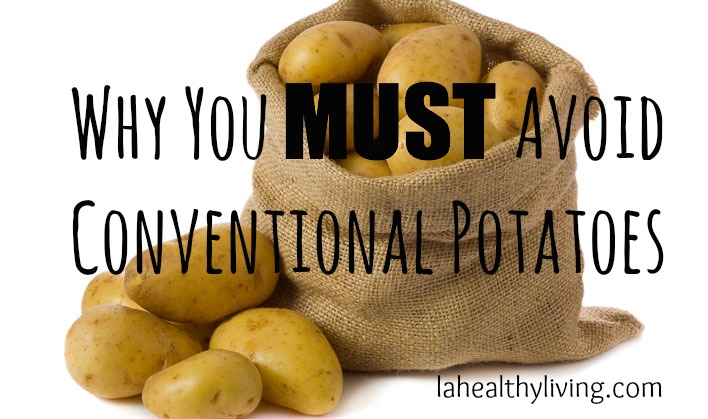 I love potatoes. They are perhaps the most versatile vegetable around. You can boil it, bake it, mash it, fry it….   Potatoes aren’t nearly as bad as some people make them out to be. Potatoes contain all 22 amino acids that form complete proteins after being easily digested. Potatoes are rich in minerals and loaded with Vitamin C and B6. As a fact, potatoes have more potassium than bananas. You might ask why would we want to avoid potatoes if they are so good for you? There is a huge difference between conventional and organically grown potatoes.

Why You Must Avoid Conventional Potatoes

Chlorpropham is moderately toxic by ingestion. It may cause irritation of the eyes or skin. Symptoms of poisoning in laboratory animals have included listlessness, incoordination, nose bleeds, protruding eyes, bloody tears, difficulty in breathing, prostration, inability to urinate, high fevers, and death. Autopsies of animals have shown inflammation of the stomach and intestinal lining, congestion of the brain, lungs and other organs, and degenerative changes in the kidneys and liver. Chronic exposure of laboratory animals has caused retarded growth, increased liver, kidney and spleen weights, congestion of the spleen and death. Long-term exposure to chlorpropham may cause adverse reproductive effects. Chlorpropham may cross the placenta.

Buy organic potatoes. You can not just simply wash off the chemicals because they have been absorbed into the flesh. Plus, organic potatoes contain more nutrients than conventional potatoes.