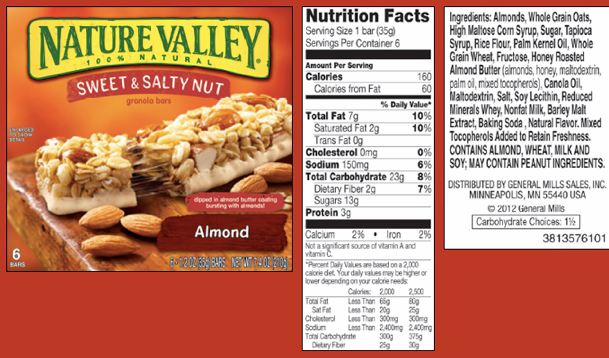 Most of us use the word “granola bars” to describe healthy, nutritious food.  However, it’s one of the unhealthiest snacks you can consume.  Dr Charles H. Booras is a physician who specializes in diabetes and is a member of the Jacksonville Center for Clinical Research, recently wrote about the best and worst health foods, granola bars came in fourth place among the top ten worst… If you take a closer look at the granola bar ingredients you will find lots of sugar, genetically modified canola oil and extremely toxic high fructose corn syrup.

One thing is certain: almost all commercial granola bars are loaded with sugar – genetically modified sugar! GM foods are very toxic and allergenic. Peer-reviewed studies have found serious, harmful effects on the health of livestock and lab animals fed GMOs.

Sugar is extremely toxic and can cause heart disease, metabolic syndrome and cancer.  Sugar causes insulin resistance, which leads to metabolic syndrome and diabetes.  Scientists believe that having constantly elevated insulin levels  can contribute to cancer. Additionally, sugar increases the concentration of bile acids in stool and bacterial enzymes in the colon, which can modify bile to produce cancer-causing compounds and colon cancer.

High fructose corn syrup consumption has been linked to many health issues such as diabetes, immune suppression, damage to the DNA, liver failure, heart disease, obesity, dementia, and cancer.

Your body breaks high fructose corn syrup down into toxic waste materials such as uric acid which leads to inflammation and various health problems. When HFCS  goes right into your bloodstream, it spikes insulin and goes right to the liver triggering the production of triglycerides and cholesterol.  HFCS consumption causes hardening and scarring of the liver which can lead to cirrhosis, liver cancer, and liver failure.

Soybean oil is not a healthy oil. It causes obesity, fatty liver, and diabetes. Soy contributes to thyroid disorder, especially in women. It  can lead to kidney stones and weakened  immune system ; contributes to food allergies and digestive intolerance.

The biggest problem associated with soy lecithin comes from soy itself because most of the soy in the market is genetically modified (GM). Researchers have proven that GM foods can create potential damages to our health. GM soy contains high levels of toxicants which represent thousands of plant biochemicals and has exhibited toxic effects on animals. Additionally, it also acts as goitrogens, which suppress your thyroid function, and  triggers many other health problems associated with thyroid suppression. Studies have shown that soy contains toxins and plant oestrogens that could disrupt women’s menstrual cycles, damage the thyroid, lower testosterone levels, stimulate the progression of breast cancer.

Canola oil is derived from the rapeseed plant.  Many animal studies show serious and irreversible effects of canola oil on rats and pigs. Almost all canola oil is produced from genetically modified crops. Canola oil and other heated vegetable oils are some of the worst ingredients to add to your food. Eating foods with canola oil will only distort your omega-6 to omega-3 ratio, which is ideally around 1:1. Canola Oil  depletes vitamin E; inhibits enzyme function,  and increases the rigidity of membranes, which can trigger degenerative diseases.