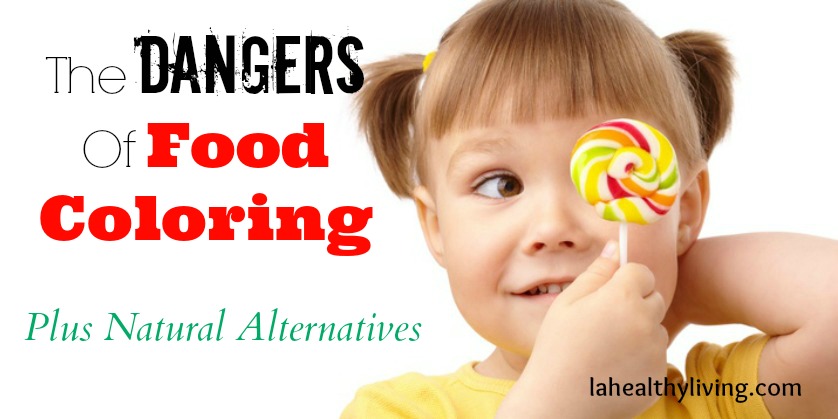 Have you ever wondered what’s in those enticing rainbow colored sweets?  They may look delicious, but there is an ugly truth about those colorful desserts. Most of them are made with artificial food coloring that should never be ingested internally.  And the worst part, these sweets are marketed to our children.  Besides obvious products such as cakes, cupcakes, baked goods and gelatin desserts, they can also be found in so-called natural juices and much more.  Coloring additives are primarily used to make low-nutrition foods look healthy.

Artificial food coloring (like this) is a serious problem both for children and adults.  More than 15 million tons of artificial food coloring is used in food manufacturing every year in the United States. The most commonly used artificial food colors include Citrus Red 2, Red 3, Red 40,  Blue 1, Blue 2, Yellow 5, Yellow 6 and Green 3.  According to the Center for Science in the Public Interest, all of these contain potential cancer-causing chemicals and most of them can potentially cause severe allergic reactions in children.  According to a study published by Southampton University,  food dye negatively affects all children, whether they have food color sensitivity or they have been diagnosed with a hyperactivity disorder. (here)

The Most Dangerous Food Colors are:

A recent study found a possible connection between Blue #1 and kidney tumors in mice.  Blue #1 is in baked goods, candies, cereal, medicine, drinks and other products.

This product can lead to the development of tumors. It can be found in colored beverages, candies, pet food, and other products.

Studies revealed that Red #2 caused tumors of the urinary bladder and other organs in rats. It can be found in skins of Florida oranges.

In 1990 the FDA admitted that Red #3 is a thyroid carcinogen in animals and is banned in cosmetics and topically applied drugs. It can be found in sausage casings, maraschino cherries, baked goods, and candies.

This is the most-widely used food coloring. It has been found to cause  ADHD and increased hyperactivity in children after consumption. It can be found in beverages, bakery goods, dessert powders, candies, cereals, foods, drugs, and cosmetics.

As one of the most often used food coloring, yellow #6 is found in a variety of products, including baked goods, candy, gelatin and sausages. It has been found to cause adrenal and kidney tumors. It also contains dangerous carcinogens.

So the next time you find yourself reaching for that tiny bottle of food coloring, opt out for one of these alternate ideas instead.