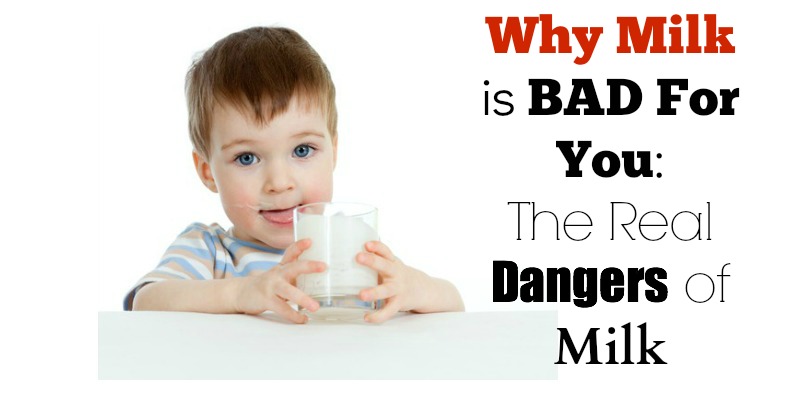 We are all well familiar with the slogan “Got Milk?”…. This marketing strategy has worked for years. The entire society (backed up by government suggestions) vigorously promotes the consumption of dairy. How else are we going to get the calcium and Vitamin D that is proudly featured on every carton of milk? Well, along with the promised calcium and added Vitamin D, you are a getting other things that might make you reconsider drinking pasteurized milk. So what are the dangers of conventional pasteurized milk?

Why Milk is Bad For You: The Real Dangers of Milk

The Untold Story of Milk, Revised and Updated: The History, Politics and Science of Nature’s Perfect Food: Raw Milk from Pasture-Fed Cows

Casein is the main protein in milk and dairy products. Casein acts in a similar way to gluten which can potentially lead to severe auto-immune problems. If you are gluten intolerant, you are most likely casein intolerant as well. Respiratory problems, allergies and illnesses are associated with the consumption of casein.  Dr. T. Campbell wrote in his book “The China Study” about a very vivid correlation between animal protein consumption and cancer development, thus showing that casein protein promoted cancer in every stage of its development. The casein protein found in milk is called A1 beta casein which is a long chain of amino acids. It is believed to be the result of a genetic mutation in cattle.  The protein found in ancient breeds of cattle is called beta-casein A2. During digestion A1 beta casein is broken down into a peptide flow of 7 amino acids called beta casomorphin (BCM7). Beta-casein A1 has a weak bond to  BCM7. Thus, much of BCM7 gets into our bloodstream, which can easily pass through the blood brain barrier into the brain where it can bind to opioid receptors. These opioids have an effect on immune function which is linked to autoimmune disorders. The absorption of BCM7 activates many changes in the immune system, in the brain, and in the blood vessels.

Cow’s milk and its products produce acid.The consumption of milk creates a net metabolic acidity in the body. In order to return to a body’s natural alkaline state and neutralize the acidity, calcium and phosphorous are drawn from your bones. Many scientific studies have shown that not only do our bodies barely absorb the calcium in cow’s milk, but actually calcium loss is increased. Amy Lanou Ph.D., nutrition director for the Physicians Committee for Responsible Medicine in Washington, D.C., states, “The countries with the highest rates of osteoporosis are the ones where people drink the most milk and have the most calcium in their diets. The connection between calcium consumption and bone health is actually very weak, and the connection between dairy consumption and bone health is almost nonexistent.”

Milk is very insulinogenic. Even though the glycemic index of dairy products is relatively low, it has a high insulin index. Researchers have found that both proteins in milk, casein and whey, stimulate the production of insulin from the pancreas. In 2001 the study of 3,000 infants with genetically increased risk for developing diabetes was done in Finland. It demonstrated that early introduction of cow’s milk increased susceptibility to type 1 diabetes.

There are other alternatives to drinking milk which include raw fermented choices such as whole milk yogurt, kefir, cultured butter, clotted milk. The general process of milk fermentation involves the production of lactic acid from lactose in the milk. Fermentation increases the shelf-life of the product,  and improves the digestibility of milk.
The Untold Story of Milk, Revised and Updated: The History, Politics and Science of Nature’s Perfect Food: Raw Milk from Pasture-Fed Cows