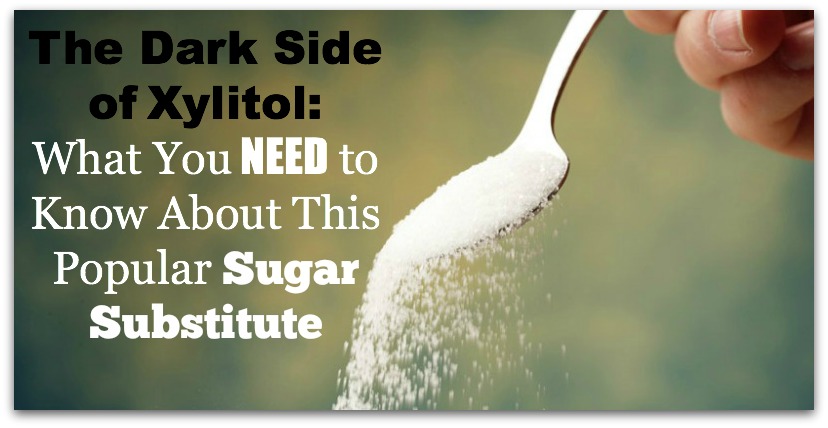 If you have decided to cut sugar from your life, you are probably looking for a healthy sugar substitutes. Perhaps, you have heard a lot of people recommending xylitol. After all, it has been a very popular sugar alternative among health conscious people andto many, it  sounds like a great choice.  It is cheap, tastes great and is as sweet as sucrose, but with much less calories than sugar. But xylitol has a very dark side to it which will make you reconsider using this popular sugar substitute.

The Dark Side of Xylitol: What You Need to Know About This Popular Sugar Substitute

What is Xyletol and How it’s Processed

Xyletol is a processed sugar that can be extremely harmful to your body. I don’t think it should be called “natural” because of the heavily chemical processes used to extract xylitol. So what’s xylitol? Xylitol is a naturally occurring sugar that can be found in fruits and vegetables. It can also be found in things like hardwood. I am sure you are wondering why xylitol would be bad if it’s a naturally occurring substance. Unfortunately, the way xylitol is manufactured will make you think twice.   Commercially sold xylitol is produced by the industrialized process of sugar known as hydrogenation.  Hydrogenation needs a catalyst, so a substance called Raney nickel is used, which is a powdered nickel-aluminium alloy. It can present significant health hazards.

It first starts with a source material containing xylan such as corn (which for the most part gets imported from China).  Here is how organic chemist Shane Elison explains the production process of  xylitol in “Xylitol: Should We Stop Calling it Natural?”.  He explains, “Xylitol is a molecular cousin to sugar and is derived from the crushed fibers of sugar cane […birch wood or corn…] using a multi-step chemical reaction that involves the use of sulfuric acid, calcium oxide, phosphoric acid and active charcoal. The end product is a bleached, powdery blend of sugar alcohols that taste sweet on the tongue but are not absorbed by the body. Xylitol will rip up your insides, namely the digestive tract. It’s being touted as a natural product, most likely so that it can bypass regulation. Thus, very little studies exist on its side effects.”

But according to xyletol.org, ” With over 40 years of research and thousands of studies confirming its effectiveness and safety xylitol is one of the newest, easiest and tastiest ways that people can fight cavities.” Really?  According to research,  xylitol will kill a rat 50% of the time in a dosage of 16.5 grams of xylitol for every 1000 grams of rat. Medium rats weigh 100-120 grams, or say .25 pounds. That means, to kill a 100 gram rat, you need only to get the rat to consume, 1.65 grams of xylitol. Xylitol’s darkest side is the fact that even according to xylitol’s promoters and advocates,  3 teaspoons of xylitol is not safe for everyone to use.

According to Ramiel Nagel the author of Cure Tooth Decay and Healing Our Children, after an extensive research on xylitol states, ” A more detailed look gives cause for even more concern, there seems to be no long term safety data about the long term health effects of regularly consuming xylitol”. The data sheets state:

Some of the other health dangers of xylitol include:

Most Xylitol Comes from GMO Corn

When the popularity of xylitol started to skyrocket, companies in China decided to learn how they could make a cheaper version , so they started using corn instead of birth to produce it. So, the xylitol you find in the store is mostly likely derived from corn, and as we know around 95% of all corn produced is GMO.

Unfortunately, having done my research on xylitol, I came to the conclusion that there is really not a lot of information on xylitol or even any references to the over 40 studies supposedly done on the safety of xylitol. Logically deducting from the information I came across, I know I will never use xylitol again. And even an innocent piece of gum made with this sugar alcohol doesn’t sound so innocent afterall. However, I can’t tell you what to do.  The choice is yours.

If you are looking for better alternatives to xylitol, here are my top 9 healthy sugar substitutes.