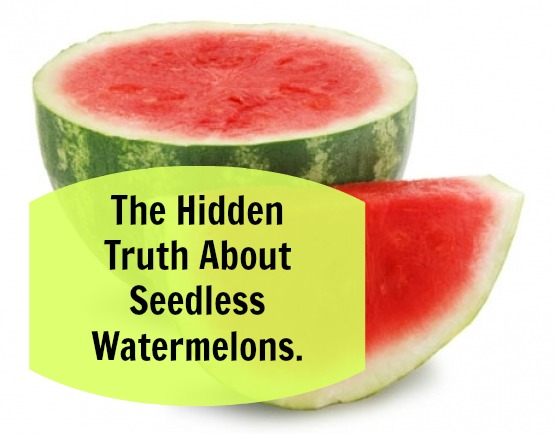 The second way to grow seedless watermelon is by using a drug called  Colchicine, a chromosome-altering chemical. This US drug is toxic (though people have been using it for the treatment of rheumatism and gout without FDA approval).   Colchicine changes the chromosome number in the seeds from 2 to 4.  After which,  the seeds are pollinated with the natural 2 chromosome watermelon. The product – a genetically modified watermelon with 3 chromosomes.

You might ask, what about organic seedless watermelons?  Well, I don’t think that there is such a thing.  Yes, it has been probably grown organically, but chemicals were used to alter the seeds.  Thus, even certified organic melons are genetically modified food.

The Dangers of Genetically altered food to your health

Many studies have proven the connection between GM foods and several major health problems. Research has demonstrated that thousands of animals who consumed genetically modified food died while animals who ate a non-GM version of the same crop had a much longer mortality rate. It is a very scary reality!

Unfortunately, it is hard to find a real watermelon in regular stores. You usually have to go to a local farmers market to get them.

The World According to Monsanto