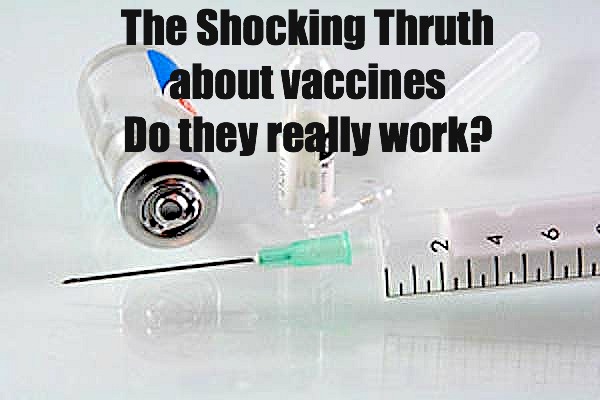 Vaccination is a very controversial topic in our society. It is like talking about politics and religion. It is nearly impossible to convince a person of the dangers of vaccines if they are firm believers of their ultimate goodness. Vaccination is a very dear topic to my heart. I’ve spent countless hours researching the pros and cons of vaccination, which led me to write an extensive research paper on the dangers of vaccines while studding at the University. Thankfully, I’ve never had to deal with any side effects from vaccines personally, but several of my closest friends did – either it resulted in horrible shaking episodes or even worse – Autism.

The Shocking Truth About Vaccines

Having your own child puts a lot of things in perspective. As a parent you definitely think twice (or I should say a hundred times) before you commit your child to any procedures. You are afraid to make serious decision that could permanently effect your children’s lives. You are probably thinking that if you decide against vaccinating and your child gets sick, then you will blame yourself for the rest of your life. This is why you need to be thoroughly informed on the matter. Due to my extensive research, I had already decided in my mind that I would not vaccinate my children before my child was born. This is a personal decision based on numerous scientific papers. My intention is not to argue but to offer some information that will help you to decide what’s right for your family. I am going to write a series on this topic that would include information about various vaccines.

A new study published in Human and Experimental Toxicology,  found that nations who give their infants more vaccine doses, have higher infant mortality rates. The abstract of the study starts with the profound notion that “the infant mortality rate (IMR) is one of the most important indicators of the socio-economic well-being and public health conditions of a country”.  The immunization schedule in the US  is the highest in the world with 26 vaccines given to babies aged less that 1 year. However, despite this intensive immunization schedule,  more than six infants in the US die per every 1000 live births compare to contries like Japan or Sweden whose immunization schedule is much less intensive – only 12 vaccines (the least in the world), with death rates 3 per every 1000 live births.

Lets look at what vaccination is and the theory behind it.

The theory of vaccinations states that by giving a person a mild form of the disease, that is by injecting a dead or genetically engineered virus into the bloodstream, it tricks the immune system into thinking you do have the disease, and thus allowing the antibodies to be formed against the virus. Consequently, when the real virus penetrates your body,  the immune system will be ready to get rid of it. However, do not be deceived. Vaccination’s do not protect you from the diseases.  Moreover, new research has proven that when people get exposed to full-strength pathogens and infections, it has a much better effect of their health because our bodies need to activate an adaptive response to the disease.

The Reality behind the Myth

In his book Immunizations; the Reality Behind the Myth, Walene James wrote,

Besides introducing foreign proteins and even live viruses into the bloodstream, each vaccine has its own preservative, neutralizer and carrying agent, none of which are indigenous to the body. For instance, the triple antigen, DPT, which is the Diphtheria, Pertussis, Tetanus vaccine, contains the following poisons: Formaldehyde, Mercury, and aluminum phosphate, and that’s from the Physician’s Desk Reference, 1980. The packet insert accompanying the vaccine, lists the following poisons: aluminum potassium sulfate, a mercury derivative called Thimersol and sodium phosphate. The packet insert for the polio vaccine lists monkey kidney cell culture, lactalbumin hydrozylate, antibiotics and calf serum. The packet insert for the MMR vaccine produced by Merck Sharp and Dhome which is for measles, mumps and rubella lists chick embryo and neomycin, which is a mixture of antibiotics.    Now chick embryo, monkey kidney cells and calf serum are all foreign proteins which are biological substances composed of animal cells which because they enter directly into the bloodstream can become part of our genetic material. They can become part of our genetic material, folks, remember that, it’s going to be important later. These foreign proteins, as well as other carriers and reaction products of a vaccine are potential allergens and can produce anaphylactic shock. Folks, anaphylactic shock is a nice word for brain damage… Most of your vaccination serums and proteins are not filtered by the liver, consequently vaccinations can be a terrific shock to the system. Injections of foreign substances like viruses, toxins and foreign proteins into the blood stream via vaccinations, have been associated with diseases and disorders to the blood, brain, nervous system and skin. Rare diseases such as atypical measles and monkey fever as well as such well- known disorders as premature aging, allergies, etc. have been associated with vaccines. Also linked to immunizations are such well-known diseases as cancer, leukemia, paralysis, multiple sclerosis, arthritis, and sudden infant death syndrome.”

How to Raise a Healthy Child in Spite of Your Doctor